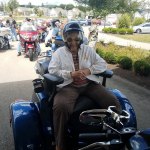 ZELIENOPLE — Elma Buttermore peered through her gold Pittsburgh Steelers sunglasses at the road before her as she sat on the back of a Harley-Davidson motorcycle.

“It was exciting,” said Buttermore, 95, a Lutheran SeniorLife Passavant Community resident who said she is no stranger to motorcycles. “It’s a great break for people like me who play bingo on Saturday and go to church on Sunday.”

Buttermore was among the residents, many 80 or older, who experienced the rush of the open road Saturday during a Harley-Davidson “ride rally” at the community at 105 Burgess Drive.

About 13 motorcyclists from the American Legion Post 474 in Zelienople met residents outside the community’s Abundant Life Center and drove them around the grounds on their sliver, blue, maroon, gray and white motorcycles.

As the bikers revved their engines for takeoff, the residents yipped and hollered while onlookers cheered with them.

Two years ago, the Legion gave a resident who was a World War II veteran his last ride at the center, said Gregory Bigger, president of American Legion Post 474.

Bigger, who has ridden motorcycles for 43 years, and other Legion members returned to the center to give residents rides because it is fun for the community.

Community resident Frank Longobardi thrust his fist into the air as the motorcycles took off and let out a quick cheer.

Longobardi, who has ridden motorcycles before, said he enjoyed the ride so much that he rode twice.

Frances Lavrinc, 82, used to ride her Honda motorcycle through the countryside, she said.

Although Lavrinc missed the rides last year, she made sure to hit the ride with the Legion members this year, she said.

“I liked it,” Lavrinc said. “I like riding motorcycles.”