Book of her life
Ready-made memoir emerges from life experiences

Amy Core got an unexpected gift at her 100th birthday party — a copy of the book she has been writing since 1998.

Core started writing her memoir, “Zelie Girl,” when she and her husband, Dan, moved into the Passavant Retirement Community at 105 Burgess Drive.

“I had a wonderful party on Earth Day, Thursday,” Core said. “We had it in the Baron’s Inn dining room.

“We could only have a certain number because of distancing, everybody wore masks and everybody had been vaccinated.”

Other friends and relatives were able to attend virtually via Zoom. Her second cousin, Paul Wicker, surprised her with a saxophone solo from his home in Connecticut. 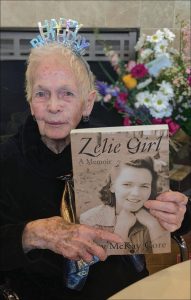 But the biggest surprise was when her granddaughter, Sarah Core of Mount Lebanon, presented her with a copy of “Zelie Girl.”

“I was going to monthly writing classes and weekly painting classes,” Amy said. “I had all these stories. The instructor said, ‘You have a book, but you need an editor.’”

Amy said her granddaughter has a master’s degree in journalism from Indiana University in Bloomington.

“She did a superb job in editing and scooped together a number of things I wrote about, like the Fourth of July get-together, with the help of the computer,” Amy said.

Sarah said the essays that make up her grandmother’s memoir began in the writing classes she took at Passavant under the direction of Nancy E. James, a retired Westminster English professor and author, who encouraged Amy to write that book out of her stories.

“As my grandmother writes in her forward, ‘I realized I had already written a book!’” Sarah said. “She basically handed me a bunch of essays and said, ‘Can you turn this into a book for me?’”

“(Sarah) worked over a period of time,” Amy said. “I almost forgot what I had written. My birthday gift was a copy of the book. I stayed up late last night reading it, and I was so pleased with what she had done.”

Amy is the descendant of Christian Buhl, who came to Zelienople in 1802.

Amy’s husband, Dan Core, was an attorney for U.S. Steel, which meant they moved to some far-flung locations, including Duluth, Minn., and Nassau in the Bahamas.

It was at a garden party in the Bahamas where Amy crossed paths with the recently deceased Prince Philip.

“I could see how he operated,” Amy said. “He was charming.

“He was there for Commonwealth Day. He was leading colonial officers that he knew.”

Amy didn’t get a chance to talk to the late consort of Queen Elizabeth II, but saw how he worked the crowd, asking questions, listening carefully to the answers and thanking the speaker before moving on to the next.

Another encounter with the famous was meeting the widow of Charles de Gaulle in a country church in France.

“She was like a fly on the wall for all these events, like meeting John Kennedy during a tree-planting in the Bahamas,” Sarah said.

There was the Fourth of July in Nassau, when Amy and her husband swam in the ocean to the sounds of the Nassau Police Band playing under the palm trees on the beach.

And there was the Fourth of July when the Cores were living in Duluth and all the fireworks exploded at once.

“An unexploded shell fell on the next display and set off an explosion,” Amy said. “That was a Fourth of July I wouldn’t have wanted to miss.

“Nobody was killed, and it was all recorded on the TV, and they played it many years afterward.”

Amy said the two best things she did in her life were marrying Dan in 1944 and moving with him to Passavant Retirement Community in 1998.

“Too many people wait until they are worn out before they retire,” she said. “And then they are not able to take part in the wonderful things we have going here, the classes and programs and activities we have.”

Speaking of “Zelie Girl,” Amy said, “I seem to be in the book business whether I planned it or not.

“It’s been fun, hearing from so many people. So many of my friends are gone, but I am able to be in touch with their families. It is fun to remember the past.”

Sarah said the book is available for sale at www.zeliegirl.com — with all proceeds from the book benefiting the author directly — and will be available online at outlets such as Amazon and Barnes & Noble later this summer.