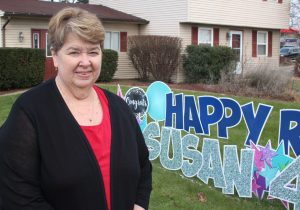 Retirement is a day that many people dream of, but on December 17, it became a reality for Susan Vogler who paid her last bill after working 42 years in the accounts payable department for Lutheran SeniorLife.
Susan began her career at Lutheran SeniorLife on May 14, 1979 as the accounts payable clerk at Passavant.  In 1985 Passavant and St. John joined to form Lutheran Affiliated Services. By 1988, all accounts payable was moved to the St. John location where Susan was able to apply for and secure a position.  In 1991, all financial operations moved to the current Cranberry location.

Susan has seen many changes and has grown in many ways, keeping up with the latest trends.  She mentioned, “When I was first hired, I processed for only one company (Passavant) and we still hand typed every check that went out the door.  Now we process for 24 different companies and receive many of our invoices electronically and file no papers in file drawers – we attach everything electronically.  I admit I was apprehensive about storing things in the “cloud” – but wouldn’t have it any other way, it’s amazing!”

Many people today switch jobs often, but not Susan.  She has worked unselfishly behind the scenes and believes in Lutheran SeniorLife’s mission. Above all, Susan has met and worked with many amazing and brilliant people who she has learned from, impacted her life and considers them lifelong friends.

Her coworkers would say the same about her.  Her supervisor, Sue Flesher, stated, “I have been Susie’s supervisor for four months and wish it could be more.  Her history, knowledge, and teamwork with in the 40 plus years of service to Lutheran SeniorLife is priceless.  Susie is a shiny gem in the treasures.  She will be missed by all, especially her co-workers in Cranberry.”

In retirement, Susan plans to travel.  She already has a few trips planned.  Susan is a big Indy car race fan and in March she will attend her first Indy car race with friends in Fort Worth Texas and a later trip is planned with a friend to Palm Springs.

On a fun note, Susan has two items that have been with her the entire time she has worked at Lutheran SeniorLife.  There may be a missing stapler and waste basket in the accounts payable department right now.

A surprise party was held in Susan’s honor to send her off in style.

Thank you Susan on an outstanding career and we wish you well in retirement!