Born and raised in Flint, Michigan, Charlotta Ross grew up playing the cello with hopes of performing in a symphony orchestra one day. 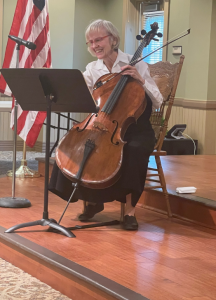 Little did she know, this dream would not only come true, but she would have many other chances to give back and share her extraordinary talents at Lutheran SeniorLife’s Passavant Community campus.

As the daughter of a minister and piano teacher, Charlotta was surrounded by music from an early age.

After she grasped the piano at 12 years old, Charlotta was eager to learn how to play the violin from her Jr. High School instructor.

However, life had different plans.

“My teacher already had 24 students playing the violin but no one playing the cello,” Charlotta said.

“So my mother said I could try it for a semester.”

That’s all the time it took for Charlotta to fall in love with the large string instrument.

So much so, that Charlotta’s mother bought her two cellos – one to play at home and another to play at school.

Back then, it cost $2 for students to rent an instrument for the year.

A price, Charlotta says, would be unheard of today.

“So at that point, the cello chose me, and I just had to do it,” Charlotta said.

From there, community donations from her hometown allowed Charlotta to spend summers at Interlochen Center for the Arts and Michigan State University until she earned a scholarship to study the cello.

After college, she went on to perform as a cellist in the North Carolina and Dallas Symphony Orchestras before she moved to Pittsburgh to pursue a master’s degree at Carnegie Mellon University.

“I didn’t know it at the time, but I would soon marry a man that went to Carnegie Mellon too,” Charlotta said.

That man was Paul Ross, the first African American to be awarded a full-time contract with the Pittsburgh Symphony Orchestra (PSO).

The two would go on to travel the world, raise three daughters and spend more than four decades performing together in the PSO.

This union included 12 years spent as dedicated volunteer conductors for children at Three Rivers Symphonette until Charlotta retired in 2012.

Approximately 500 people auditioned for a chance to take Charlotta’s spot once she stepped offstage.

Today, Charlotta shares her talents with us at Passavant Community during various campus events and performances.

“Those are the parts that make me so happy to live here.”

Additionally, all of our residents enjoy vibrant opportunities for total health and wellness on-and-off our 42-acre campus.