When Andrew and Stella Szakelyhidi of Zelienople got married, Harry S. Truman occupied the Oval Office, Charles Schulz published his first “Peanuts” comic strip and American boys were being shipped to a new conflict in Korea.

Fast forward 70 years, three children, seven grandchildren and 11 great- grandchildren later, and the couple is still going strong.
The Szakelyhidis celebrated their anniversary with a surprise drive-by parade at their home at Passavant Retirement Community, which is just down the street from Andrew’s childhood home.

Friends and relatives drove past, stopped and chatted from their cars or honked their horns to signify their respect for the couple’s seven-decade marriage.

The rarity of a 70th anniversary is not lost on Andrew, 97, who fought in the Battle of the Bulge during World War II and also served during the Korean War.

Stella, 93, said she was overwhelmed at the drive-by greetings from friends, family and neighbors.

“We thought it was just awesome,” she said. “We were supposed to just talk to our son and daughter-in-law and all these other people appeared, including neighbors we haven’t seen in years.”

Stella said the couple has enjoyed their seven decades of wedded bliss by sticking to the motto “We agree to agree or we agree to disagree.”

“I just figure that men and women think differently and I think sometimes if I don’t agree with how he’s thinking, well, that’s just his opinion,” she said.

Their daughter, Dr. Betty Jean Bardella of Greenville, Mercer County, said both her parents were born to immigrant parents and lived through the Depression as young people.

“They worked hard to establish themselves,” Bardella said. “Probably their proudest achievement is that they put all three kids through college and myself through medical school.”

She said she and her siblings were happy to be able to celebrate their parents’ milestone with a drive-by parade.

“They are both dearly loved by all three of us children,” Bardella said. “We are very grateful for everything they’ve given us and they are cherished.” 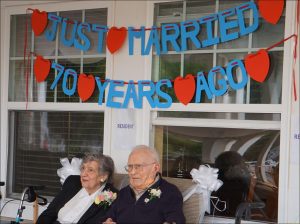 Andrew and Stella Szakelyhidi of Zelienople, who marked their 70th wedding anniversary Sunday, enjoy a surprise drive-by parade of cars carrying friends, family and neighbors past their home at Passavant Retirement Community in Zelienople. The above photo was submitted to Butler Eagle staff.