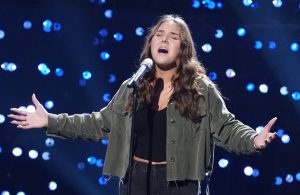 Morgan Gruber, 17, of Fombell has been serving meals after school at the Passavant Community Newhaven Court for the past year. Now the high school senior is serving up notes as a contestant on American Idol.

Gruber began her Idol journey when she traveled to Austin, Texas for her first audition where she sang “Can’t Be Loved” by Elle King before “American Idol” judges Katy Perry, Lionel Richie and Luke Bryan.

As soon as Gruber began to sing, Richie expressed immediate approval. After her performance, all three judges, Ritchie, Katie Perry and Luke Bryan, stood up and gave her a well-deserved standing ovation and praise for her unique voice and singing style.

“Let me tell you why I’m so pleased by this” Ritchie told Gruber. ‘You came in here and not only gave us fabulous delivery, but it’s your style. If I heard your voice singled from everybody else, I’d go ‘Morgan’. That’s what you want in this business.”

“That was amazing,” an impressed Perry said. “I don’t really have very many critiques for you.”
Likewise, Bryan stated “I looked at Katy. She says Top 20. My sheet says Top 20.” 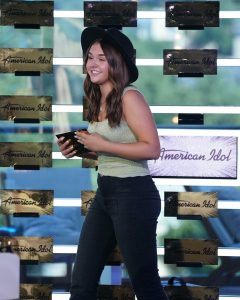 Gruber was all smiles after receiving feedback from the judges who then told her she was headed to Hollywood to chase her dream.

In the next round, Gruber competed in the “pop music” competition category and continued to impress Idol judges with her version of Demi Lovato’s “Anybody”. The performance was so impressive, Perry implied she should have been given one of the three platinum tickets awarded in the last round, which would have had her skip this round automatically.

Gruber’s win means she will compete in the duet competition on Sunday, April ,3 and Monday, April 4 on ABC. Be sure to tune in and support this brilliant, rising star!