Courtesy of the Butler Eagle

ZELIENOPLE — A little town honors veterans with a memorial wall — a very little town whose buildings and people total inches and millimeters.

The display is a long-standing feature at the retirement community, and is now a small town. The first building went up in 2014, and every year, new features are added.

Taylor, 93, once crossed a deadly slope lined with trenches every Friday, reporting on the amount of ammunition used to support the United Nations artillery division. He dodged machine-gun fire along the 38th Parallel, a border where fighting grew especially violent, until reaching the shelter of the bunker across the slope.

Taylor was never shot, but a stovepipe in the bunker struck him in the head when he was not wearing his helmet, or “steel pot,” as soldiers called it.

He explained that although his helmet was designed as headwear, these same helmets often served as useful multipurpose basins.

“I went to a medic … and he put stitches in,” Taylor said. “But he didn’t have no cloth to put on there. He used super glue.”

It took some years before Taylor realized how the medic had improvised, but the injury appeared to have healed, despite the lack of medical supplies on the front lines.

Taylor and other members of the Passavant Train Club began rebuilding the community’s tabletop town eight years ago. Some of the late residents who participated in past projects had served in the military during World War II and the Korean War.

Their names now loom above tiny townspeople in wheelchairs or on benches that marvel at the monument. Since then, other residents have died, bringing their names to the wall and to other landmarks within the display. 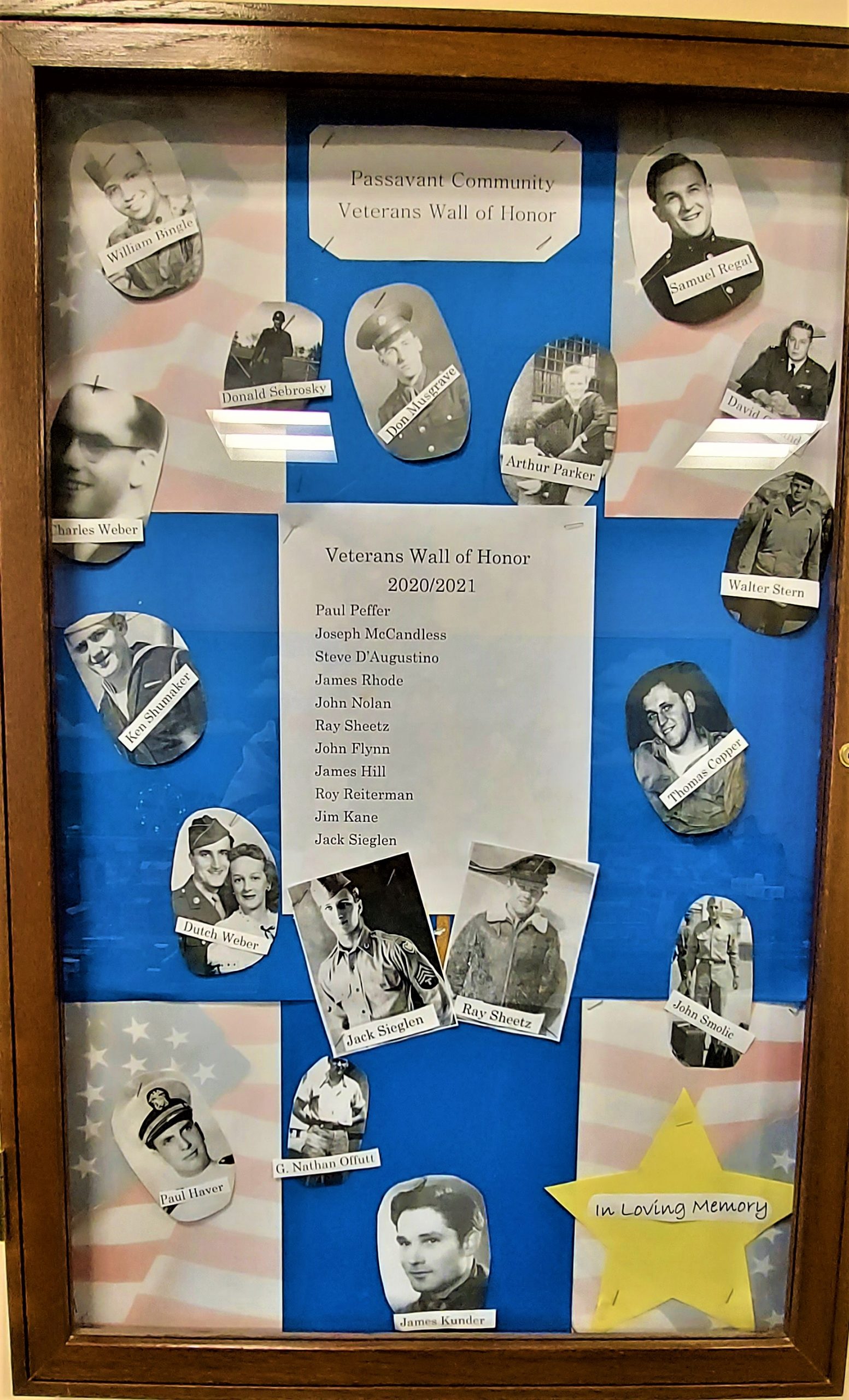 A glass case containing photographs of train club members who’ve died faces the train set from a nearby wall, supplying faces to accompany the names.

“We’re very proud of this, and it gets a lot of attention, what it means to people, especially to seniors, coming by,” said fellow veteran Dave Reckless, a first lieutenant who also served in the Korean War.

Reckless, 87, pointed out the flags on the monument and the array of military branches represented, which included the Army, Navy, Marine Corps and others.

A fountain with a glittering glaze gushes beside the wall, a feature Reckless said he’d crafted and placed there.

“After somebody comes up with an idea, we kind of all pitch in, and we have little ideas to tweak it, to add to it — we do that, which is the case with so much of what you see up here,” he said.

He remembers his experiences there warmly. At one point, the first sergeant transferred to his unit proved to be the same first sergeant who’d just trained Elvis Presley, who was then serving in Germany.

So as a company commander of basic trainees that was probably one of my most rewarding experiences, to see these guys go from ‘the Outback,’ so to speak — so many of them came from Kentucky, and some of the Southern states and so on — and to see them develop into soldiers,” he said.

Reckless’ company would go on to receive honors twice as the most outstanding of all basic training units at Fort Knox, he said.

Passavant resident Jim Fister, who engineers much of the electronic circuitry behind the train set, said that while the town does borrow elements from Zelienople, it is its own independent creation.

He also pointed toward a mural behind the train, of a grassy expanse with trees, hot air balloons, a Ferris wheel — that mural combines with the detail of the train set to create the impression of an endless horizon.

Passavant Director of Community Life Jody Gulish said the memorial wall project drew inspiration from the traveling version of the Vietnam Memorial wall for veterans that passed through Zelienople in 2017.

Expanding the monument never really ends, with the train club bringing new additions to the project each Veterans Day. Sometimes the club makes changes midway through the year, as well.

“I think that we need to remember that honoring and serving is a big portion of what these guys did, but they do this from the heart,” Gulish said. “I have a shirt, and my son has a shirt — we both wear it. It says ‘Freedom is not free.’

Because the guys that are here … and the veterans that fight for us are the reason that we have the freedoms that we have,” she said. “And I think it’s of utmost importance that we remember that and that we need to honor them.”

She said the need to recognize veterans from World War II and the Korean War grows especially urgent as these people pass away with age, so that their stories are remembered and passed down.

Her own active role in helping the train display take shape amounted to more than a responsibility as a community leader at Passavant, she said.

“That’s something I truly want to do because I’m honored to do it,” she said.

She wants veterans to know how much they’re appreciated, she said.

“And it’s huge to me here,” she said. “This is like a sacred day. You do not disturb the veterans program. … That ceremony with our flags and our guys going down the aisle — that is sacred here. It’s sacred to me, and I want to make sure it is to everybody else.”